A Story of the Travelling Bhagavatam 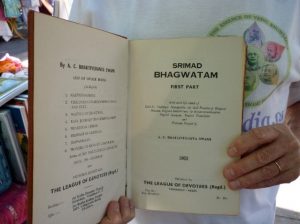 When Srila Prabhupada first came to America he brought with him a trunk containing copies of the first three volumes of Srimad Bhagavatam. Some of these books, which were published in India by Prabhupada, are still traveling the world making a difference in the lives of devotees and others.

In the 1960s Srila Prabhupada began to translate and print the series of books which would be his life’s work.

“With great difficulty I published the second and third volumes of Srimad-Bhagavatam until 1965, when I prepared myself to come to this country with some books,” he wrote in a letter from Los Angeles in 1970.

“Some books,” as Prabhupada put it, was actually 200 sets of the first three volumes of Srimad Bhagavatam. “I saw my books from Bombay arrived in five cases and the agents loaded them on the ship at 4 p.m. on 22/8/65,” he wrote in his Jaladuta Diary.

It is unknown how many of these first books are still travelling the world. What we do know is that they are still making a difference in the lives of devotees and others.

In the summer of 2010 Visnu Murti Dasa and Laksmipriya Dasi of Vanipedia.org had an encounter with one of these traveling Sannyasi books. Upon meeting Visnu Murti and Laksmipriya, the book immediately set about fundraising for the Vanipedia.org web site, which is the on-line extension of Prabhupada’s books, letters and talks. Laksmipriya tells the story: “We were at the Ratha Yatra in Paris, France and had set up our book table to interest well wishers and others in these jewels of Krishna consciousness.

“Now, another devotee named Ambika, who owns a bookshop, also sets up her book stall at the Ratha Yatra to sell esoteric French books. Sometimes she has one or two second-hand English books. At one point I slipped away from our book table for a minute to check out her stand,” Laksmipriya says. “Just imagine what I saw – the first volume of the original Srimad Bhagavatam set that Prabhupada came to the USA with.”

Laksmipriya’s jaw dropped as she took the book in her hands. She couldn’t believe what she was holding. She asked Ambika if she was selling the book. Ambika said yes. Laksmipriya checked the back of the book and there was a price—seven Euro. Incredulous, Laksmipriya said: “You’re selling this book for seven euro?” Smiling, Ambika nodded.

“I ran back to our table like a mad woman,” Laksmipriya recalls. “I yelled at Visnu Murti: ‘You know what? You know what? That lady there is selling the first part of one of Srila Prabhupada’s original Srimad Bhagavatam books… for seven Euro!’ And Visnu Murti yelled right back at me: ‘Go and get it!’”

She quickly made her way back to Ambika’s table and rescued the book. Bringing it back, she offered it to Visnu Murti. “We were both looking through it with great delight, and relishing our good fortune. It was just so beautiful,” Laksmipriya says.

Visnu Murti and Laksmipriya had only been relishing the Bhagavatam for a few minutes when another devotee, an old friend of Visnu Murti’s, came by. Excited, they told him the whole story.

“So will you sell me the book for 21 Euro?” he said jokingly. “You get three times more for it like that, good profit for you.” Then Srila Prabhupada’s book began to weave its magic. Visnu Murti and his friend sat down and spoke together for a few moments. Laksmipriya could not hear what they were saying. The two men got up and Visnu Murti explained that the devotee had just agreed to give a donation of 1008 Euro to the Vanipedia web site project in exchange for the book. Speechless, they agreed.

“So, there it is,” says Laksmipriya. “At least we held Srila Prabhupada’s original Bhagavatam in our hands for few moments. Who knows what is the path of that book, where it came from and where it will continue to go, travelling by land, or sea, city to city, country to country? It has its own path and goes where it wants to go. It has been travelling already for 48 years.”

Laksmipriya and Visnu Murti returned to Ambika’s stall and asked her if she had any more of the original books. But she didn’t. She wasn’t even quite sure how she got hold of the first one. It was all quite a mystery.

“I find this is a wonderful example of how Srila Prabhupada is directly assisting us in the mission of building Vanipedia.” Laksmipriya says. “Lets see what his next glorious intervention will be.”

Visnu Murti Dasa and Laksmipriya Dasi live in Radhadesh, Belguim. They lead a team of Krishna’s devotees in presenting www.vanipedia.org, a dynamic online encyclopedia of Srila Prabhupada’s teachings. Vanipedia aims to explore, discover and comprehensively compile these teachings from every angle of vision, presenting them in accessible and easily understandable ways. You can find a sample of their work here: Srimad Bhagavad Purana.

You can assist the Vanipedia project by volunteering your services  – please write to: [email protected]

You can also make a donation to assist with the work – please visit: www.vanipedia.org/wik 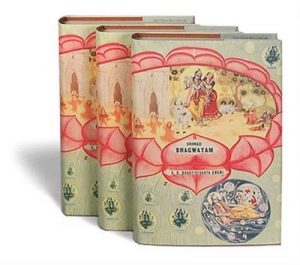 We use cookies to ensure that we give you the best experience on our website. By clicking the agree button or by continuing to use our site, you consent to our cookie policy.I agreePrivacy policy